My mother always warned me not to be too prideful, not to gloat. Yet despite her warnings, I have decided to throw all cares to the wind and explain to you how proud I am to be a teacher, a veteran, and a union member.

I knew going in to this job as a teacher librarian there would be no medals for finding a child a good book to read or teaching them to find an authoritative website to use for research, yet I am proud of what I do. I find it to be a pleasurable occupation and love to show off my libraries when I get the chance.

In the short time I served as a member in the U.S. Navy, though I never served in battle and never left the United States, I am also extremely proud to be a veteran. I have come to realize that all veterans deserve tribute for having served anywhere, at any time, even in peacetime, far from battle. 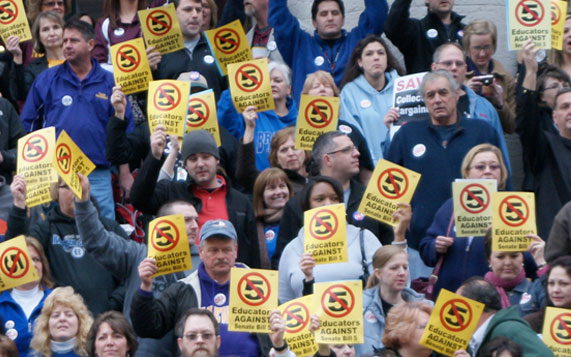 Something happened to change that while attending the National Education Association’s Representative Assembly this past July in Washington D.C. It had to do with a fellow teacher from Minnesota, Matt Reuter, who was an Air Force veteran and had served in Afghanistan in 2011. Unbeknownst to Mr. Reuter, Minnesota law 471.975(b) penalized educators who went on active duty. A small deduction was made, to the tune of $11,300, to pay for his substitute.

Fortunately this outrageous requirement was fixed by Minnesota Governor Mark Dayton (see Educator Thanks Dayton for Helping Vets ). Teachers no longer have to pay the difference for their replacements and I have to say that I was proud when the NEA awarded Governor Mark Dayton the 2012 award for America’s Greatest Education Governor. Unfortunately Matt Reuter was still out his $11,3000.

Sitting in the Ohio section of the convention center, I thought that was the end of the story… until a fellow delegate got up to the microphone and said, “There are approximately 11,000 delegates in attendance. How about we all chip in a dollar, so Matt Reuter can get his $11,000 back?” I applauded, the crowd cheered and suddenly attending my first national Representative Assembly took on new purpose. When the hat was passed I donated all the bills in my pocket. Never have I been so proud to donate to a cause that would benefit a fellow teacher, a fellow veteran, and fellow union member. Never have I been prouder of my profession and my union family. In the end the NEA assembly raised $13,600 for Matt Reuter.

I thought about the evil image the far right media often portrays of unions and teachers and how ignorant they choose to be. I have retold this story to dozens of friends and will continue to do so until the day I die. No longer will I hide my pride in silence.