It doesn’t feel like Spring in Northwest Ohio. My lawn is no longer covered in snow, but another dose of the white stuff could be coming our way mid-week.

In Austin, Texas on the other hand, you can wear shorts and eat barbecue on a restaurant’s outdoor patio. I know because I did. 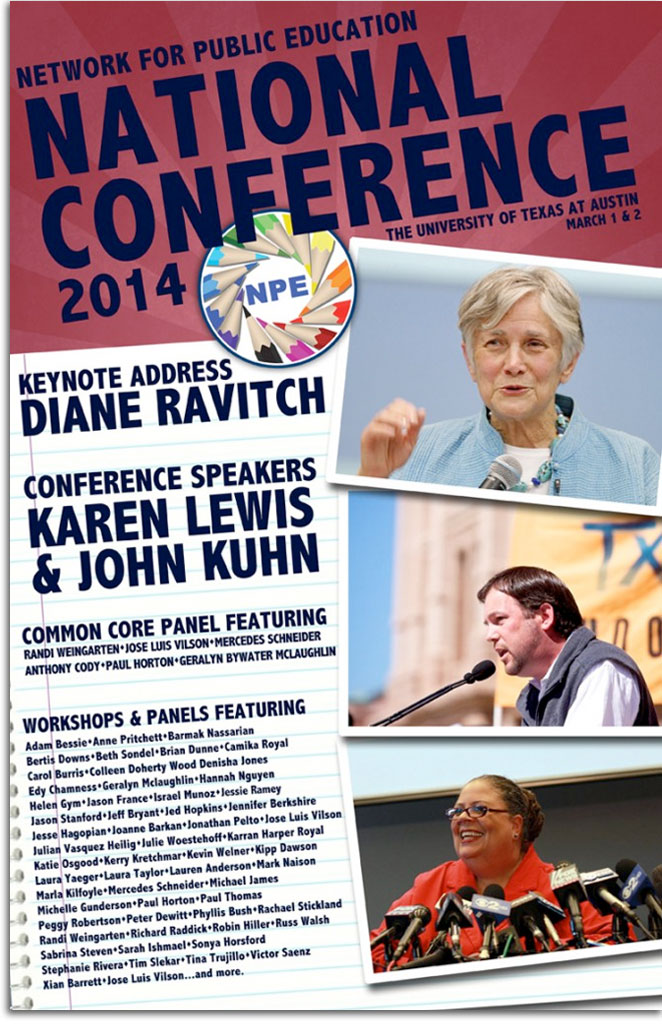 Earlier this month I traveled to Austin, Texas for the Network for Public Education (NPE) National Conference. Spring was definitely in the air in Austin, but it had less to do with the weather than with the NPE conference attendees.

The group of 400 teachers, administrators, students and parents spoke a great deal about spring, but the spring they were referring to is the upcoming “education spring,” which we are hopeful will play out over the next few months.

The 400 activists who convened in Austin believe that this spring we will see communities coming together in opposition to the “education reformers” and their harmful policies, and every one of them is doing something to make change happen. They shared inspirational stories and demonstrated what can happen when you stand up for public education.

For example, there was Jesse Hagopian, a teacher from Seattle, who is a building rep for the teachers at Garfield High School. He and his colleagues worked with parents and students to opt out of the MAP standardized test. Although Jessie and the other Garfield teachers were afraid of the consequences for their stand, they did what they saw as the right thing and were able to stop the administration of the MAP test.

There were representatives from a parent group called Texans Advocating for Meaningful Student Assessment, or, as education advocate Diane Ravitch calls them, Mothers Against Drunk Testing. This group of moms was outraged by the number of high-stakes standardized tests high school children were slated to take and they worked across the state to build support, while engaging in dialogue with elected officials. Pointing out that Texas was testing more than any other state, they persuaded legislators to pass House Bill 5, which reduced the number of high stakes tests from 15 to 5.

Hearing stories of “regular people” making a difference was inspiring, as were the remarks of some prominent education advocates in attendance, like Diane Ravitch, who dusted off her cowboy boots for the trip to the Lone Star State and gave one hell of a keynote address. Her guns were locked and loaded as she took aim at charter school profiteers and elected officials across the political spectrum.

She said for-profit charters should be stopped and banned, and called virtual charters a Ponzi scheme. On standardized testing, she pointed out that legislators love “school choice,” but will not give children the choice to opt out of high stakes tests. She questioned the effectiveness of the 3rd Grade Reading Guarantee  (The state is saying my third grader is a failure. How does that encourage children to do better?).  She had little positive to say about “education reformers” and their powerful astroturf groups funded by corporate billionaires, like Michelle Rhee’s organization, StudentsFirst (They don’t give a damn about kids).

Diane’s remarks captured the tone of the weekend. They reflected the determined, energetic spirit of the conference attendees, who resolved to go back to their communities, form coalitions with people who care about public schools, and defeat those who are destroying public education.

The thought of my fellow activists advocating for public schools across the country in the coming months excites me. I realize the education spring is just around the corner, no matter Ohio weathermen may say.