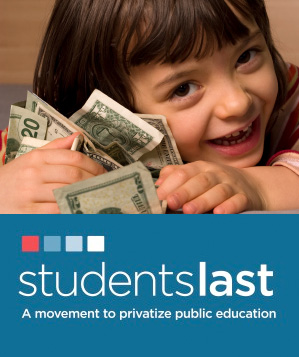 The trend of blaming teachers for the problems in education probably won’t fall out of favor any time soon. Last week, School Choice Week, so-called education “reformers” did their best to scapegoat teachers instead of acknowledging the real systemic problems — such as school funding and poverty — that lead to poor performance and problems in education. Self proclaimed “reformer” Michelle Rhee, former Chancellor of the D.C. schools and founder of the political lobbying organization StudentsFirst, has said, “We will no longer describe failure as the result of vast impersonal forces like poverty or a broken bureaucracy.” For Rhee, and other so-called reformers, well-established facts confirming the correlation between poverty and the achievement gap don’t matter.

Neither do policies that work, like having smaller class sizes, increasing pre-kindergarten programs, and hiring more school psychologists and school librarians. But these reformers, with limited to no experience or training in the education field, refuse to listen to the experts, classroom teachers. Again, Rhee is a perfect example. “If there is one thing I have learned over the last 15 months, it’s that cooperation, collaboration and consensus-building are way overrated,” Rhee said. If she’s not interested in input from educators, where do her ideas for education reform come from?

Rhee never studied education. She majored in government after attending an elite private high school. Her preparation for classroom teaching consisted of a five-week stint with Teach for America (TFA) after which she was placed as an elementary school teacher in Baltimore, Maryland, where she was known for not having much control of her students. After three years, she left the classroom — 80% of TFA teachers do — and she started The New Teachers Project (TNTP), which acts as a teacher training and placement program for poor, inner-city school districts.

Rhee’s organizations, like most in the “reform” movement, are revenue-generating nonprofits and their services don’t come cheap. TNTP charged the Oakland Unified School District $807,446 from 2006-2008. Fortunately, not everyone is so entranced by her spiel. In 2011, John C Liu, New York City Comptroller, denied a five-year contract to the TNTP for $21 million He remarked, “Twenty million dollars to recruit teachers, as the Department of Education insists on laying off thousands of teachers, seems curious at best.”

In 2007, without having any experience as a principal or superintendent, Rhee was recommended to head D.C. public schools in 2007 by her friend and TNTP client, former New York public schools Chancellor Joel Klein. Frontline’s documentary, The Education of Michelle Rhee examines problems Rhee had as Chancellor of the D.C. schools. The documentary’s most startling revelation is that test scores appear to have been doctored in many schools, showing significant gains in math and English for students. Rhee paid principals, vice principals and teachers tens of thousands of dollars in merit pay for those test scores. Perhaps Rhee hasn’t never heard of Campbell’s Law, which predicts that when huge stakes are attached to quantitative data, the data becomes subject to tampering and manipulation, or of the Vanderbilt University study that found no evidence that merit pay raised student test scores.