Posted On: November 13, 2013 by Cornershop Creative 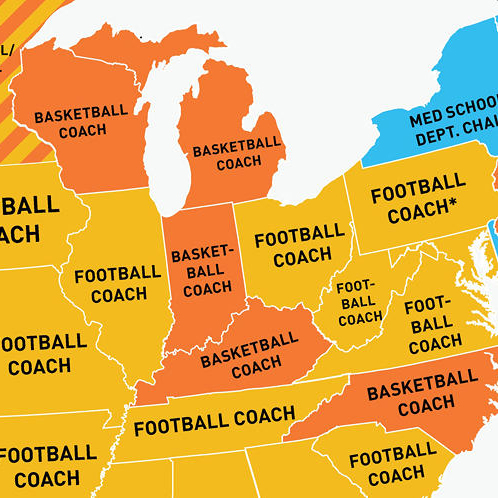 In all but ten states, coaches are the highest paid public employees. This is certainly true in Ohio, where Ohio State’s head football coach, Urban Meyer, made over $4.1 million from the university in his first year, not including bonuses.  Ohio’s next highest paid public employee? OSU basketball coach Thad Matta, who makes $3.8 million, again not including bonuses. Both employees get transportation stipends worth over $14,400 per year. Not to mention the private jets that the university allows them to use for recruiting trips.

As a society, we look up to sports heroes. We find their personalities inspiring and their stories intriguing. Their images are enhanced by public relations departments hired by universities to polish the image of coaches and athletes. At the same time, we look up to public employees, whose jobs are dedicated to service. Firefighters, police, teachers, and health professionals consistently rank among the most admired professions in national surveys. So why do coaches receive more money in a year than teachers earn in a lifetime?

The average salary of a first year public school teacher in Ohio is about $33,000. So why is the political vitriol over salaries in this country aimed at teachers and not coaches? The answer is complicated, but must include a media that singles out problems in education, while failing to describe the outstanding daily accomplishments that occur in our nation’s schools every day.

Many people justify coaching salaries by claiming that coaches generate money for schools. However, while a coach may be responsible for bringing in some revenue, the university rarely, if ever, sees that revenue. That money goes toward overhead expenses, such as paying the expensive salaries of athletic administrators, assistant coaches, and trainers. Non-personnel costs include the high cost of maintaining stadiums, holding dinner banquets and constructing posh training facilities, as well as providing everything from security to housing for athletes.

[quote]Very little money ends up in the hands of the academic institution’s general fund. In fact, according to an ESPN study of 99 major universities, including OSU, the average athletic department loses $5 million per year.[/quote] When generous donations are removed from the equation, the average athletic department loses more than $17 million per year. The Michigan-Ohio State game isn’t subsidizing the anthropology department.

Unfortunately, there is little evidence that earnings increase with harder work or with accomplishments. After all, Urban Meyer made $4.1 million last year despite not playing in a bowl game. While uninformed politicians and inexperienced education “reformers” are calling for teachers’ salaries to be decreased when their students don’t score well on a test they take in April, nobody is suggestion that Meyer make less money if his players miss a tackle in September.

This brings us back to our question. Why is the vitriol directed at teachers and not coaches?

The reason is this: it is much easier for someone who does not correctly understand the complexity of a situation to blame a class of unidentified people rather than an identified person. The disproven idea that coaches generate revenues is easy to understand and requires little thought, even though it is wrong. The proven idea that teachers generate long-term economic stability, an informed citizenry, and higher personal incomes, by teaching young people in a variety of subjects, and with a variety of methods, is more difficult to understand, even though it is correct.

Most students, parents, and communities respect the teachers they have. Unfortunately, the political vitriol that is drummed up against public employees is created by a media that does not want to explain complex situations. Thus, they have created a generic “bogey teacher” who does not do his or her job and must be punished with oppressive conditions and salary cuts.