For the past couple of months, I’ve had the opportunity to travel around Northwest Ohio, presenting information to groups about so-called right to work at Urgent Member Meetings — Protecting Ohio Workers’ Rights (POWR) — along with my friend Kate Jacob from the AFL-CIO. Although it’s not as glamorous as a city-to-city rock band tour, the meetings have been worthwhile and the purpose has been far more significant.

Before the meetings, I thought I knew everything I needed to know about so-called right to work, but I was wrong. As I poured through the information, I saw a great visual that really helped me understand how so-called right to work would impact unions. After all, the law does not come right out and ban unions from existing or state what unions can and can’t bargain for. 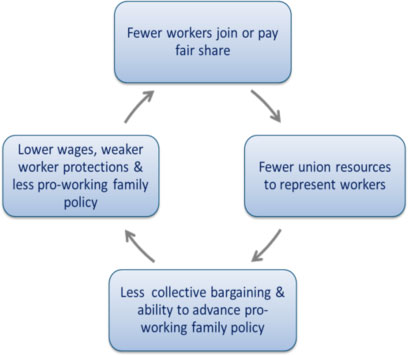 The diagram illustrates the downward spiral that it creates. It starts with fewer workers paying dues, which translates into less resources and diminished ability to advocate, which leads to lower wages and benefits, which results in fewer people joining the union because the union is less effective, and the cycle go on and on …

The meetings were an opportunity to hear workers’ stories. I met a couple of people who spoke of the struggles they’ve experienced over the years to maintain their rights. One gentleman talked about his work on the team that developed the campaign the last time the so-called right to work fight came to Ohio, in the late 1950s. It was powerful to be in a room filled with so many workers, from all the different unions, who are just as concerned as I am about what this dangerous legislation will do to our jobs.

Most of the Urgent Member Meetings have been in schools and many of the people who testified as to the complications of teaching without strong union representation had taught in charter schools, parochial schools or public schools in so-called right to work states. None of those teachers are looking to return to the conditions they worked under before moving to public schools in Ohio.

When I talk to teachers at these meetings, I try to draw on the parallel between plagiarism and so-called right to work laws. We wouldn’t tolerate a situation where a student gets an A by copying another student’s paper, having done none of the work to earn that grade. Why would we tolerate a situation where most workers contribute to the union so they can negotiate a fair contract, while a few pay nothing and get the exact same benefits that the union bargained for?

We also discuss how this split, between educators who pay dues and freeloaders who pay nothing, is bound to cause animosity. Teachers need to work together collaboratively to benefit their students and this animosity could hinder the process — making all teachers less effective.

In my last meeting, with teachers from the neighboring district of Springfield, we talked about the aspect that is most frightening to me as a union leader: reprisals. I work hard to represent the teachers in my local and sometimes that means saying tough things to administrators. Our collectively bargained contract has provisions in it that protect me from retribution and reprisals for acting on behalf of my teachers. In so-called right to work states, with one-page contracts, no such protection exists.  Under so-called right to work, I would have to compromise the advocacy I do for my colleagues or risk losing my job.

While I have enjoyed talking to Northwest Ohio workers over the last two months, it is downright scary to think about the impact this so-called right to work legislation could have on so many others and me. At an Urgent Members Meeting a few weeks ago, someone said that it wasn’t a matter of “if” we will see this type of legislation introduced, but “when.” That comment proved prophetic last week when three Ohio House members introduced so-called right to work legislation. It is no longer a far off hypothetical. It is staring us in the face. Find an Urgent Member Meeting near you on We Are Ohio’s Facebook Events page at https://www.facebook.com/weareohio/events. We all need to educate and arm ourselves with the facts for the coming battle ahead.