For those of us who routinely spend Halloween on the road campaigning for one issue or another, the canvass can seem monotonous. You knock on door after door, delivering the same message over and over again. If you’re lucky, you’re a part of a well-organized campaign, such as the one we’re working on—We Are Ohio’s “NO on Issue 2” campaign—which means that the IDs are solid, and you’re almost exclusively speaking to people who support your position. This makes the canvass quick, but sometimes less rewarding—it’s generally much less exciting to urge people to vote than it is to persuade them to vote your way. 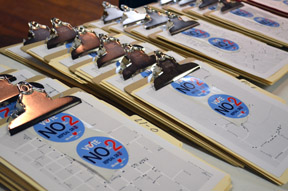 But once in a while you come to a door which completely shifts your perspective. That happened to me tonight.

I knocked on the door of an older couple in a working-class suburb of Cleveland. When the woman and her husband came to the door, they looked tired, as though they had worked hard their whole lives. Their house was modest and the yard was perfectly manicured. An American car sat in their driveway. These were not political activists or party loyalists…just ordinary people trying to live their lives.

I introduced myself and asked if they planned to vote NO on Issue 2. The husband nodded and went back to sitting in his chair in the living room. The wife looked at me and said emphatically, “We are absolutely voting ‘NO’ on Issue 2.” I thanked her for her support, circled ‘1’ on my walk-list to indicate her strong support, and began to leave. As I turned back to wave good-bye, I caught the woman looking up, as though she was trying to fight back tears.

Then she looked down at me and said, “I don’t know how anyone could vote any other way.” I agreed, and asked her if she would consider volunteering for the campaign.

“I can’t,” she explained. “My husband is sick. That’s why I feel so strongly about this issue. I have to call emergency services to my home frequently. I cannot describe the feeling of relief I have every time one of those paramedics walk through my door. It is an absolute disgrace that these guys could leave their job today to work at McDonalds and earn about the same salary. I don’t know what I would do…I just don’t know what I would do if we didn’t have these people. They’ve saved my husband’s life.”

And there it was in a nutshell. That’s what we’re fighting for here in Ohio. Nothing less than people’s lives. And I am thankful and honored and humbled to be a part of it—sore feet, and all.