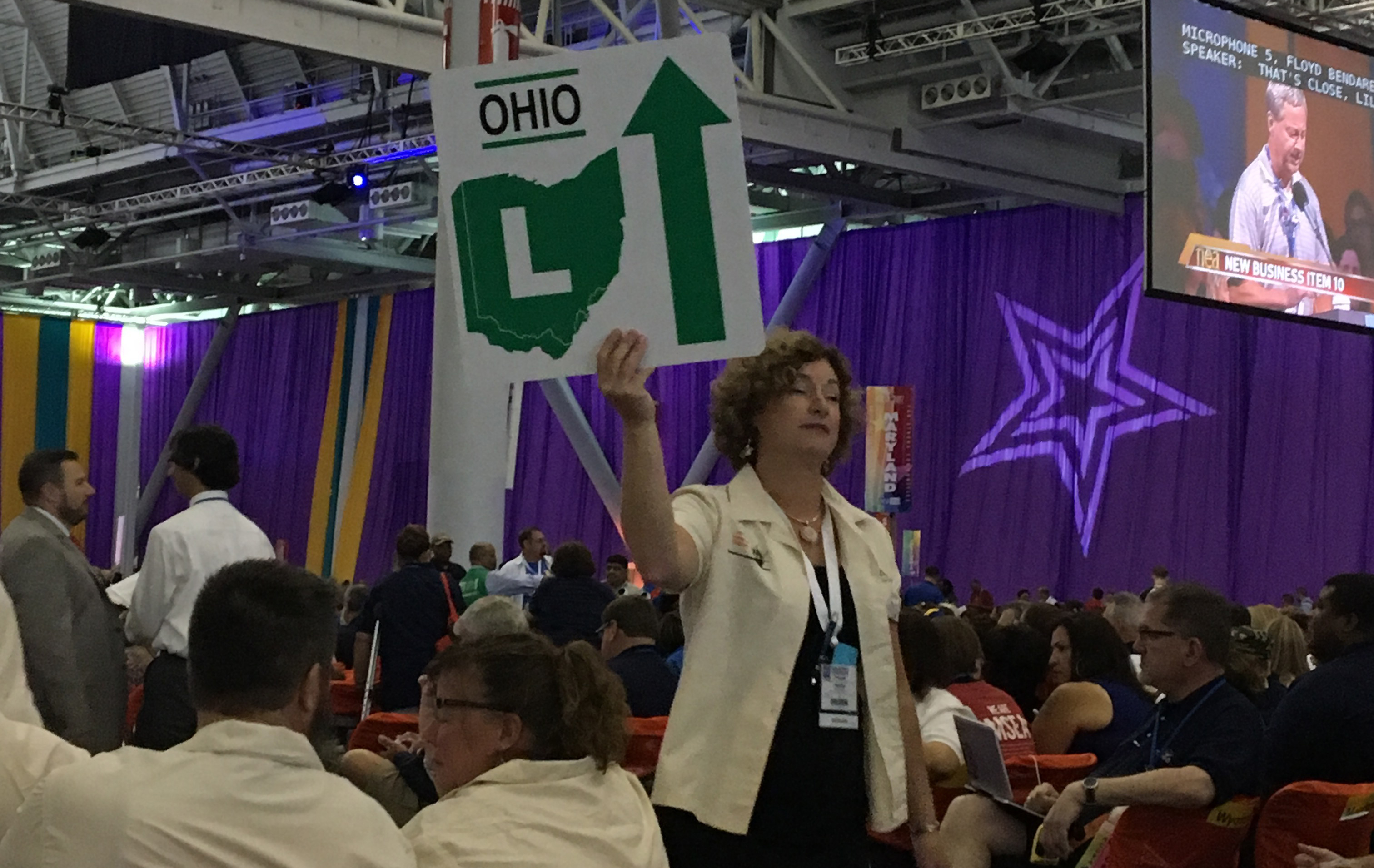 Anyone who reads social media related to the OEA/NEA can see that the perception of some of our colleagues is that OEA/NEA isn’t doing enough about certain issues, or worse, isn’t listening to members’ opinions. If that is your perception, let me assure you as a first-time delegate to the NEA RA (Representative Assembly) held this summer in Boston, that our union leaders are listening.

The bulk of the time spent at the NEA RA consisted of presenting and debating New Business Items (NBIs), proposed amendments to current NEA Resolutions, new policies, etc. Anyone could submit an issue or amendment to be discussed on the floor. In our morning meetings with our fellow Ohio delegates, we listened to the recommendations of various OEA committees who had reviewed the upcoming issues and whose members gave us a brief explanation of why they recommended either supporting or opposing the item/amendment. There was frequently a debate, and then the Ohio Caucus voted on a position to take. However, it was made very clear that any delegate could vote however he/she chose. At the RA later that day, with delegates from all states present, and often after very robust debate, we voted. An Ohio communications team held up signs reminding us what our Ohio Caucus decided about the item, but we were not obligated to follow that decision. Sometimes other delegates proposed an amendment to the issue at hand, and the Ohio Communications team then showed signs with our Leadership Team’s recommendation regarding the change. Still, delegates could vote however they wished.

If you ever want to see democracy in action, all you have to do is observe the floor of any OEA/NEA RA. If the verbal vote is too close to call, a standing vote occurs. In Boston, I saw friends, colleagues, and roommates next to each other…one standing, one sitting. We sat as a group but we voted as individuals, and it was powerful to see so many people united in respectfully making their opinions known.

The debates leading up to these votes were epic (if you don’t believe me, look up NEA RA memes on twitter!). Sometimes, a debate occurred over one word. For example, we debated whether or not the word “powerful” should be used in an NBI to describe the NEA, and whether or not the word “zealously” should be used to describe a particular action. More substantial issues were debated as well, such as when the NEA should endorse presidential candidates and the new NEA policy on charter schools. At this year’s RA, there were 159 NBIs,  three Constitutional Amendments, 12 Standing Rule Amendments, eight Legislative Amendments, 16 Policy Statement Amendments, and 31 Resolution Amendments submitted. Each of these were discussed and debated.

It was my first time attending the NEA RA, which is basically like the OEA RA amped up. I had attended the OEA RA before, and so I thought I knew what to expect. That wasn’t always the case. Some issues that I felt would have short discussions actually spark some of the fiercest debates. In all of these cases, my eyes were opened to another perspective that I had not considered. And in all cases, the voices of the delegates were heard. Sometimes my vote fell on the victorious side and sometimes my vote was for the side that got defeated, but I have no doubt that the end results represented what the majority of the delegates wanted.

Being able to understand how someone else perceives an issue often complicates matters. Understanding someone else’s perception can make your own convictions less black and white. It can muddy your positions. But hearing the viewpoints of other OEA and NEA members is an opportunity for which we should be grateful. It is something we should value, and after attending both an OEA RA and the NEA RA as a delegate for the state of Ohio, I very much appreciate that our association goes to such lengths to hear every viewpoint before voting as a body. I have learned a lot about the process of how the NEA forms its core beliefs and the actions it takes in the name of those beliefs. Because I care very much about the perception of my colleagues in the OEA, I want to assure you that our various viewpoints are being heard at both the state and national levels.

It is no easy task to formulate policies and recommend actions that represent the members of the largest union in the country. The viewpoints of others must be taken into account and there must be a process for allowing that to happen. For me, being a part of the largest democratic deliberative assembly in the world was alternately exhausting and exhilarating, frustrating and gratifying, mind-numbingly boring and absolutely inspiring. It is also categorically vital to maintain our mission to offer the highest quality public education in the world to our students, and to do so while advocating for economic and social justice, diversity, tolerance, and fairness in our schools and in our communities.

I urge you to attend an OEA or NEA RA if you are given the opportunity. I am extraordinarily grateful for the chance to witness firsthand how our union discusses, debates, deliberates, and ultimately decides how to best serve our students and promote our shared values in these challenging times.