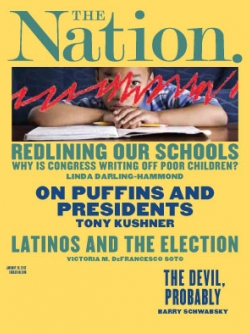 “Why is Congress Redlining Our Schools?” is Linda Darling-Hammond’s incisive piece on No Child Left Behind, Race to the Top and the marginalization of our poorest children in the Nation’s most recent issue.

Please read it here or pick up a copy of the magazine. There are many things in the Darling-Hammond piece that surprised me, such as why the U.S. ranks so low in international education rankings – poverty! – and how the Reagan revolution dismantled reforms that really worked in the 1970s.

Today, Darling-Hammond zeroes in on how new federal programs – the proposed Elementary and Secondary Education Act and Race to the Top guidelines – deal with schools in the bottom 5%. Federal policy now formally redlines these schools, she concludes, just as banks have used a red line on a map to exclude some poor and minority communities from any kind of investment, mortgage or commercial loan.

I’m familiar with bank redlining practices as a former financial journalist. In the 1980s, most banks hired minority or community representatives as apologists and made lots of promises to minority groups as part of merger proposals. After the mergers, the banks abandoned branches in poor areas. They canceled inexpensive basic services. As they shut down shop, high-interest paycheck lenders, high-fee check cashing services and pawn shops moved in to victimize the poor.

Darling-Hammond says sanctions like closing public schools in the bottom 5% or turning them into charter schools will yield similar disasters for poor communities.

Here are the problems with sanctions against the bottom 5%:

“Blaming teachers for the ills of high-need schools lets policy-makers off the hook and keeps the more fundamental problems of severe poverty, a tattered safety net and inequitable funding under the rug,” Darling-Hammond concludes. This irresponsibility is not just in schools themselves, but in the communities around them. Here’s what’s missing:

Will we ever get a match between new common core standards and the common resource standards it will take to compete internationally? “Unlike high-achieving nations that fund their schools centrally and equally, most American states spend three times more on their wealthiest schools than they do on their poorest,” Darling-Hammond says.

In Ohio, Republicans threw away Gov. Ted Strickland’s funding plan, which aimed at equality as a long-term goal. On the national scene, both parties are soon going to preside over budget cuts that will cut as many as 30,000 teachers, NEA says. If you follow Darling-Hammond’s logic, nobody can demand great results from a system of standardized tests and sanctions like the one we’ve been in since No Child Left Behind.