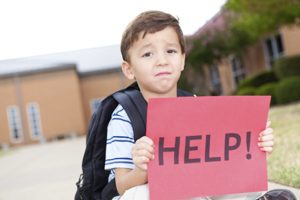 It starts at the very beginning of the day. At arrival, some kids trudge in, others are jittery and anxious. All students start the day in the gymnasium for the school’s daily morning assembly. As the school secretary, I stay in the office, but I can hear the teachers and staff give a pep talk – “You’re going to do great! You’re going to rock the test!”

But even before the test begins in the morning, I see students in the clinic. “I threw up in the bathroom.” “My stomach hurts.” When I’m wearing my nurse hat, I usually ask, “When did this start?” “When I woke up.” “Did you tell an adult at home? What did they say?” “They said the test is important and I have to go to school.” Lots of parents feel it, too.

Today’s test, or section of a test (most tests have multiple sections and are given over multiple days), starts and ends at a specific time. But in the office, I don’t know if one class starts ten minutes late because they’ve decided to give kids one more chance to use the bathroom, or because they’re waiting for Sally, who is a half-hour tardy almost every day, to show up at school. This means I don’t know exactly when the test ends.

For a half hour, an hour and fifteen minutes, or two and a half hours, there needs to be silence. Often the principal and school psychologist are both administering tests and cannot be disturbed. I send out an e-mail plea for teachers to keep students in their classrooms and not send them down to the office for behavior problems. This is also important because the other rooms in the office suite are also being used for testing – students who receive special accommodations test in these spaces, so the office needs to be quiet during the test, too.

If students arrive at school late, after the test begins (and we almost always get at least one late arrival), they need to stay in the office until the test is finished. Usually they have a book and can keep themselves occupied. Sometimes a parent angrily demands, “Why does she have to sit in the office?” (despite paper schedules, e-mail messages, and even automated phone calls to families the night before, pleading with them to help their children get a good night’s sleep and arrive at school on time because today is a testing day). Occasionally a parent will take their child with them and leave in a huff. But usually, the student(s) and I wait for the all-clear, to let us know that testing is over and they can rejoin their classes.

After the test is over, I get more clinic visits. Sometimes the kids know they’re truly sick and have just come to school to take the test. This always makes me a little proud and a little sad. Sometimes they tell me that their head started hurting or their stomach started twisting just before or during the test. Sometimes they are not really feeling bad, they’re just looking for a little extra TLC on a stressful day. These usually aren’t my “frequent flyers,” students who I see in the clinic a lot. They’re just regular kids who are stressed out by standardized test after standardized test.

Kids also talk to me about the tests. Luckily, at the elementary level I haven’t gotten any deep questions about why they have to take the tests, although I know they touch on this in their classrooms. They tell me things like, “I’m scared. What if I fail the [OAA reading] test and can’t go to 4th grade?” Or “I’m sick of taking tests.”

They don’t know that these are high-stakes tests. They don’t realize that if many of them do poorly on one or more of the tests, in our district at least, their teachers may be offered probationary contracts instead of standard contracts. They don’t understand that low performance on these tests may lead to a reduction in funding for the entire school.

And I’m glad. Because the ways things stand today, these tests make our students anxious enough.