My daddy was a Teamster in the 70s when the news was full of stories about the ERA not passing, stagflation of the U.S. economy, and Jimmy Hoffa’s disappearance. I didn’t really mind that the big, brash truck driver was a Teamster. It just struck me that unions were a part of everything wrong with the world.

There were a number of news stories on TV about teacher’s unions striking. I really liked school. So when I would read about legislators trying to pass laws that said it was illegal for teachers to strike, I found a lot of validity to the idea.

Fast-forward to 1983, and I had just been hired for my first teaching position in a rural school district in Central Ohio. A fellow staff member stopped by to ask me if I wanted to join the teachers’ union (it was not a “closed shop”). I asked, “Do I have to?” He said, “No, but the union does negotiate for your contract, so there will be a fee from your monthly paycheck for that anyways.”

So I told him, “No thanks.” Visions of striking teachers and Jimmy Hoffa swimming with the fishes flooded my common sense. The not-so-liberal media was awash with unflattering portrayals of the United Auto Workers making cars more expensive by earning more than $15 an hour. Commercials sang out “Look for the union label . . .” in the 1980s to counter the beating that unions were getting in the newspapers.

I accepted my second teaching position in a suburban school district in Southwestern Ohio. I was asked, again, if I wanted to join the union. I passed again. However, it was my third job, at a private school, that brought it home for me. I ended up working there for 11 years, and each year I had 8-11 preps a week. I was the science department for grades 6-12 for awhile. I felt an immense responsibility to my students, but the pay was poor compared to my colleagues in Columbus. When positions opened up in Columbus Public Schools in the late 90s, I interviewed and got in.

My yearly income immediately increased by $14,000 and I had very nice benefits. I was elated to be part of a “closed shop” and making a real living wage, but I still wasn’t a full team player when it came to union meetings and union events.

So, how is it that now I am one of the building reps for my local association? I think it has to do with several chilly afternoons spent on the Ohio Statehouse Grounds next to ASFCME, NEA, and OEA members. When SB5 threatened to make the lives of union members across the state of Ohio difficult, I discovered the power that came with a mobilized work force. I found myself asking how I could help.

I was asked if I wanted to attend an event I had never heard of called “OEA Member Lobby Day”. Karen Andermill told me that I could meet face-to-face with elected officials to discuss SB5. I thought, “I can do that? Wow, count me in.” I went with a group of teachers from CEA and some state representatives refused to even see us! I knew I had to do more. 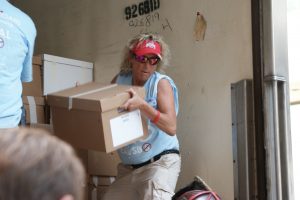 I volunteered during the summer at the OEA office doing data entry and verifying signatures for the effort to put the issue on the ballot. And to my surprise, it wasn’t at all hard to volunteer. I was making a difference on behalf of my fellow union members. In June of 2011, I was returning home from a stone carving class downtown when I saw 6000 union members deliver 1.3 million signatures in a semi-truck. I was greatly moved because I had helped make that happen.

In the fall, I found myself sitting in the statehouse alongside firefighters and police officers and watching the disdain that some members of the state legislature had for public employees. We were from different unions, but we were unified in our efforts to stop this bill from becoming law.

One afternoon I found myself standing next to an older gentleman wearing an American flag bandana on his head with a ponytail trailing down his back. His sign said, “TEAMSTERS for TEACHERS.” I said to him, “My daddy was a Teamster too.” He smiled and said, “We are all in this together.”

We were, and we won, but that doesn’t mean there aren’t other issues to discuss. That’s why I find myself serving on my building committee. Because even the smallest issue needs to be resolved.