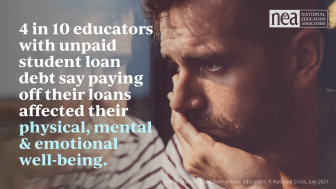 From pre-K to Ph.D., our right to learn, grow, and thrive should be based on how big we dream and how hard we work. But the astronomical cost of higher education—even public higher education—forces many students to either forego their education or be trapped in a lifetime of debt. No matter who we are or how big our bank accounts, we should be able to learn without limits.

From national advocacy to individual support, NEA is working to ensure that education is affordable and accessible to all. On July 27, NEA released a report analyzing the state of educator student loan debt and the ways we can work together to make a more just system for all.

The July 2021 “Student Loan Debt Among Educators: A National Crisis” report presents the results of a 2020 NEA survey of educators working in pre-K–12 and higher education institutions regarding student loan debt. In line with research on student loan debt within the general population, we find that student loans play a significant role in the financial lives of many educators and have disproportionate impacts on specific subgroups.