When I checked out the site for “Ohioans for Workplace Freedom,” the group supporting what OEA chooses to call the No Rights at Work Amendment, I thought about my students, and how confused and misled they would be if they accessed the page. 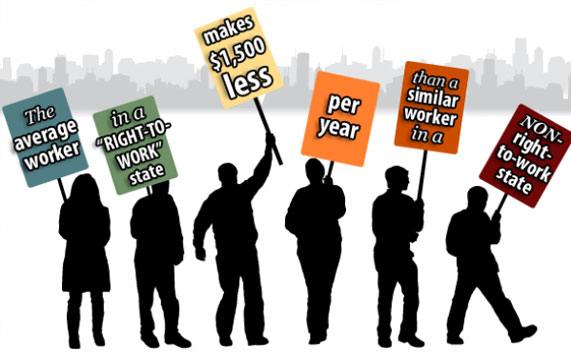 Every year, I teach my sophomores and juniors how to write research papers. They struggle with knowing how to find credible, useful information on the internet. They frequently assume that the first site they find is the best one and disregard other sites. They have a hard time understanding bias and they often don’t understand the motives that an individual or group might have for publishing information in a certain way.

The site is managed by “Ohioans for Workplace Freedom,” the group that is circulating petitions to put what is ridiculously referred to as “Right to Work” (RTW) as a constitutional amendment on the November ballot.

The page features several photos of people, most of whom are wearing construction hats. There’s one of a teacher and a student at chalkboard. Everybody is smiling — if they knew what No Rights at Work represented, I don’t think they would be smiling.

The text of the website sounds logical and inoffensive. Under the “Learn” tab, for instance, the rationale for “Workplace Freedom” is explained: “No one should be forced to join a union or pay dues or fees against their will just to have a job.” The page further states, “Workplace Freedom means – more job growth, increasing wages and more opportunities for everyone!”

To the average person, the words don’t raise any flags. In fact, the claims seem quite sensible. If my students were looking at this page, I know they would take it at face value and consider “Workplace Freedom” a cause we all should embrace.

However, if people took a minute to delve deeper into those claims and into the individuals behind “Ohioans for Workplace Freedom,” the biased and misleading statements would quickly become readily apparent.

First, a cursory look into their “facts” finds them to be patently untrue. RTW does not mean more job growth. Research by the Economic Policy Institute finds no relationship between the presence of a RTW law and job growth, per capita income, or state unemployment rates. Rather than “increasing wages,” the average worker in a RTW state earns about $1,500 less per year than a person working in a non-RTW state. And their last claim, that RTW means “more opportunities for everyone,” begs the question: for whom? It clearly doesn’t mean more opportunities for workers. Maybe it means more opportunities for unscrupulous fat cats to make higher profits at workers’ expense by paying them lower salaries.

Then look at the author of the proposed Constitutional Amendment, Maurice Thompson, who is Executive Director of The 1851 Law Center. That’s the group that tries to repeal school levies, like they recently tried in Westerville for example. The 1851 Law Center also pushed Ohio lawmakers to eliminate Ohio’s estate tax in the last budget, which cost the state millions of dollars, while at the same time cutting funding to Ohio schools and other programs.

Upon continued examination, you discover Chris Littleton, a spokesperson for “Ohioans for Workplace Freedom,” is also the President of the Cincinnati Tea Party. Another key figure of the “Ohioans for Workplace Freedom” group is Bryan Williams, who happens to be Director of Government Affairs for Central Ohio Associated Building Contractors. This group supports the repeal of Federal prevailing wage laws, which establish guidelines for fair compensation for employees.

These gentlemen are not criminals or degenerates, but they do represent a far-right political ideology that they and “Ohioans for Workplace Freedom” dress up in a fashionable, well-crafted message that deceives readers seeking information about so-called “Right to Work.” They understate what No Rights at Work means to hard-working Ohioans, including teachers, trying to earn a decent living and voice their concerns about working conditions.

Even the name sounds like it stands for something commonsensical, noncontroversial.

I know it would fool many of my students. Let’s hope it doesn’t fool Ohio’s voters.